Hi Everyone, I just want to thank all of you for the kind words and support. And for your genuine compassion and hard work in turning this time stream toward a hopeful and positive future. I’m not saying we won’t have to pay for the trudge through the mud of the last 8 years, but our choice now will greatly help not just the US, people of all races, ethnicity’s, women, and men, but also the world as we are all more interlinked now then we have ever been.

That being said we are going to have some crazy times ahead. And I will try to help navigate the waters ahead as best I can. As I mentioned before the stock market and the global economy is going to go through a very tough period. And remember Barack Obama is President elect, his energy is not yet attached to the karma of our country until inauguration day when he takes power. So we are going to see the Bush continium until the end of January. And Pluto goes over the Dow’s first house starting late December until late January. We will start to see some very odd stuff. Perhaps the reality of the economy will depress sales at Christmastime and further contribute to the Dow, and the rest of the world’s financial crisis come January. This aspect is exact until about January 22. I think inauguration day is the 24th, so perhaps the new energy of Obama/Biden taking office will bring some hope to the market, and the worst will be over for awhile.

However, in August of 09 Pluto will again go over the Dow’s first house as it retrogrades, and hopefully we will see our government use this energy in a positive way to put in place new regulations in an effort to restructure rather then the other alternative, another plummet. I’m going to be optimistic right now, and say this will be the start of a major restructuring of the global economy, and it will start here at home with the way America does business. Now we could also see the market react negatively to this, as we all know many investors don’t like changes, restructuring or regulation much. But it will be necessary and ultimately to the world economy’s advantage. If we don’t restructure, it will get very bad.

But, I do believe President elect Obama will make this a top priority in his administration. And I’ll let you know what I think will happen to the economy. I was going to answer a bunch of questions tonight, but I have been swamped the last few days, and will do so again tomorrow. So keep asking questions! This makes my job a lot easier. And a lot more interesting.

I decided tonight it was best to focus on the economy because I’m sure people are getting nervous about the market again now that the election is over. I’ve also gotten a plethora of questions about this issue, all of which I haven’t had time to address, but will over the next few days. I was too busy with the election to help those dealing with the economic crisis first hand.

So here are the charts of the DOW, NASDAQ, President elect Obama and VP elect Biden: 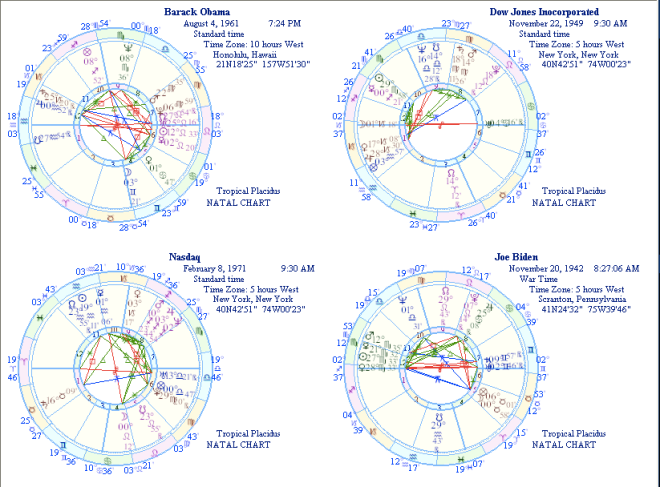 There is something very remarkable here! As bad as John McCain’s chart’s interaction was with the Dow, the opposite is true of President elect Obama. The Dow’s 8th house is Leo, this represents the investors/speculators. Obama has a stellium in Leo arcing over this house and into the 9th and he actually has Venus (a very beneficial planet that rules money) making an exact aspect to the Dow’s Moon which will be set off by Pluto. This aspect will literally soften the effect of the crisis. With Obama’s Venus being in the Dow’s 6th house there will be work done to the Dow (it will conjunct Uranus and make the opposition to the 1st and Moon which is where the Pluto transit is going to be) but with it being Venus, he will actually help stabilize the economy despite the volatility we will continue to see.

Also with his Sun conjunct the Dow’s 8th house, there will be a lot of people making money in the market. He also has Chiron in the Dow’s 8th which means he will help heal the situation for investors. Obama’s Saturn in the Dow’s 1st house means he will bring strict rules and regulations and order to the market. And his Jupiter (in Aquarius) is also in the 1st, showing he will expand the market in technology and attract more foreign investors in our companies. Perhaps even expanding the way our market is viewed in the world. This same Jupiter conjuncts the Dow’s Part of Fortune in the first, again, he will help bring a renewed prosperity.

OK I need to turn in for the night.  But let me say, that seriously the US really made the right decision here, for so many reasons! Not just because Obama is graceful, insightful, intelligent and compassionate, or because he’s broken barriers, but because he is going to do amazing things. He is going to turn this country around for the better in so many ways. And one of them will be fixing this economic crisis. Obama will show himself to embody qualities of FDR, Lincoln and already we’ve seen the parallel’s to Kennedy.

He will be a great president.

Congratulations to all of us!

The Stock Market And How it Interacts With Our New President Elect
Loading Comments...