It’s a very strong yes and she will be excellent at the job.

Will Hillary Become the Secretary of State? 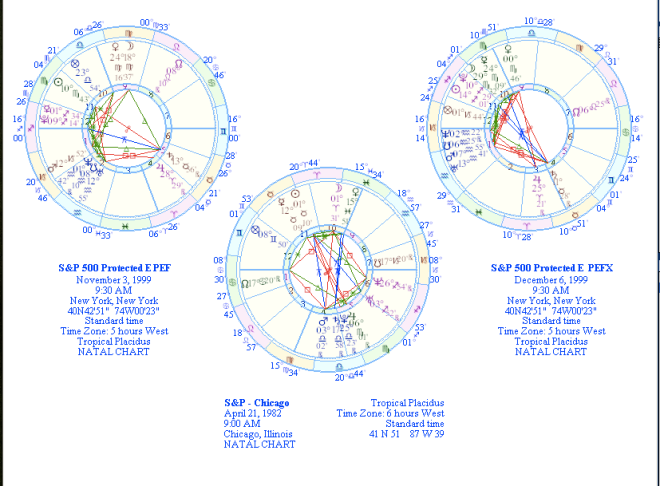 Really there is nothing of great note in the S&P Protected E PEF. Except Saturn conjunct the natal Moon Sun in the 9th and of course on over the course of the year to just conjunct the natal Venus. Meaning foreign investment in this market will be down and money tight but not a horror show. There’s a little dip mid-December, but there are also positive aspects offsetting the negative. I don’t get a bad feeling, not that it won’t go through some major changes, it will, Pluto is going through its 1st house, so along with all the other new regulations and market face lifts this one will have its share, but it won’t be as adversly effected for some reason.

What will be going on with the S&P Chicago is a bit more complex. There will be a lot of volatility as aspects both negative and positive move through the chart. The most troublesome is transiting Pluto squaring the natal moon in the 10th house in late December of this year (08). I feel this will have to do with lay offs and make the market extremely volatile at that time, fluctuating wildly as people try to get a grasp on what is happening. Just before this period in mid-December there will be a transiting Jupiter square to natal Pluto in Libra in the 5th house. This could mean the disclosure of some sort of legal malfeseance, making speculators weary about investing.

The one area that should do OK, maybe even do pretty well is food products, especially comfort foods as Pluto will be making a trine from the 6th house (very likely grain or corn or something like that related) to natal Sun in Taurus (again food reference here, healthy conscious with it being the Sun) and because the Sun is ruled by Venus natally in Pisces in the 10th I’m going to speculate its an older company, one that has been around since the depression or before the depression of the 30s (also related to liquid, could it be soup again?) But because the Sun is in the 11th, a company that has tried to re-invent themselves as healthy, delicious and nutritious.

Again a lot of volatility. There are a lot of aspects (and a feeling I’m getting here) that people will feel trapped, unable to get out even if they want to. Saturn is transiting the 8th house so there isn’t a tremendous amount of money here in general for investors to make and there hasn’t been since a little over a year ago. Not a lot of money being paid out to. But with Jupiter transiting the 1st house and trining tranisiting Saturn in the 8th, both planets making sextiles to natal Mercury and eventually the natal Moon there is and has been opportunity for financial growth its just relatively conservative and feels more stable then many other markets right now, like a good place to keep your money for the time being.

However in late December and through mid-late January Pluto will be conjuncting the natal Part of Fortune in the 12th meaning there will be a (more then likely a temporary) shift in value not seen by the general public, but it could encourage some secret restructuring to keep the S&P Protected E PEF on track. In mid-February there will be some trouble cracking through the ice as transiting Neptune will square natal Mercury in the 10th. During this period there could be losses and the public perception of loss and under-performance of this market.

So there you go. Hope that helps. If you have a specific question about any of these markets please post it and I will answer as quickly as possible.

Best wishes and good luck to all,