OK, I did a screen shot of the prediction I made December 6, 2011 – which was a year and a half ago when Newt Gingrich was leading in the polls by 40% and was the supposed shoe in. I’m re-posting it due to its prescient nature.

Here is the other thing I have meant to post since Ryan was named as VP was this same voice told me Ryan was the nail in Romney’s coffin. His fate had been sealed. Interesting how ridiculous and unsubstantial the RNC convention was especially in comparison to the DNC one unfolding which I had privately predicted but didn’t bother to post.

I do want to post all the mean spirited Republican comments that have been made on this site because it only shows what these “Christian” people are made of – the word is HATE. As far as I know hate isn’t a Christian value except in Republican circles and among crazed religious zealots who stone others to death or blow themselves up in the name of their God.

If someone does engage in hatefulness no matter what form – most especially if it that hate is utilized to hurt or destroy others – than without a doubt, ABSOLUTELY they are going against the WILL OF GOD. And they are perverting religion (no matter what kind) to fit a political agenda in order to suppress other human beings who BTW God also made. You may wish God to be on your side, but God is only on the side of the pure of heart and those who move His/Her children forward toward love, community, humility and peace. Fear, anger, hatred, suppression are all hallmarks of the opposite of a holy or God inspired or religious/spiritual person. If you choose the darkness than expect it to overwhelm you, expect to be sucked down further and further until you can’t tell anymore that you are even drowning in it – until your very soul is strangled and you cease to exist. I don’t believe in hell, but I do believe evil is soul destroying. And I mean that very literally.

So here’s a screen grab so you can see the date it was posted: 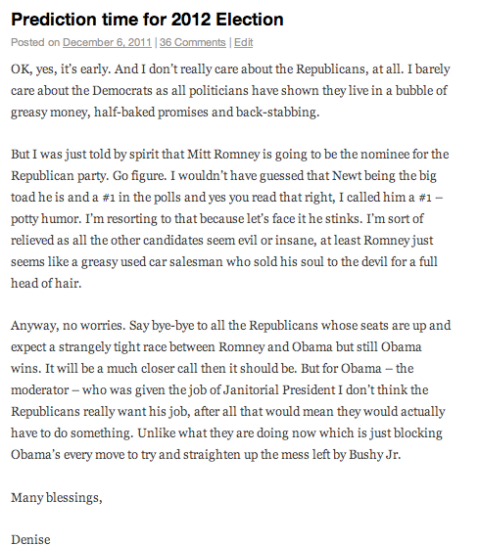 9 thoughts on “Prediction for 2012 Election”