I was told before the 2008 stock market (my warning about that is what started this blog) that there would be 2. That was very clear. I started clairaudiently hearing this information at the beginning of 2007, but ignored it. Not until the spring when it became like a fly in my ear did I really take notice and then it became an internal knowing, a viscerally certainty- that was when I put the message in a bottle and started this blog. At first I couldn’t even find my blog – I had to bookmark it. It didn’t show up on any google search, but about when the economic Meltdown came (about a month later) someone started directing traffic to my blog. I don’t know who, but I saw the evidence of that. Someone knew how to boost the SEO and did this for me anonymously- I am very grateful to that person.

Well this new tax reform has been seriously freaking me out. I had put that second crash into the back of my mind. A lot of people have asked me when it would happen. But it didn’t seem likely in the foreseeable future. The past couple of months I’ve been looking into crypto coins for a client and started getting a feel or tuning into the markets. I had pulled all our retirement money out of the stock market about 2 months before the crash. I wondered if perhaps because I had no skin in the game anymore (as I never put money back in fearing the other shoe drop I was told about) so I recently used an app to buy a very small $100 worth of stock across many categories as a sort of Psychic thermometer. Through that I did feel more linked in. Once this crazy tax bill started down the pike I had hoped that the republicans would realize the political suicide they were performing and pull back. But now I really feel we are in the period before the 2nd crash. I think we have almost 2 years. I looked at October of 2019 as being a stock market meltdown. I will do more research, but this is an early heads up, so start preparing now for what will be worse than the last economic meltdown- this is going to be a massive financial earthquake unlike anything we have seen in generations.

I have a working chart for the approximate time. I will refine this as I go.

* update * Ok thanks for noticing that I had the wrong chart up here. The first chart below is likely to be a downturn – a harbinger or correction. The second chart when transiting Neptune is conjunct the natal Dow chart – it will very likely be a major crash. I have so many charts for this – I apologize as I have ben trying to nail down a time frame since the beginning of 2017. I will do more research and find other indicators to narrow this down. If anyone has any ideas please email me or post it in the comments so I can try to delineate this more accurately! 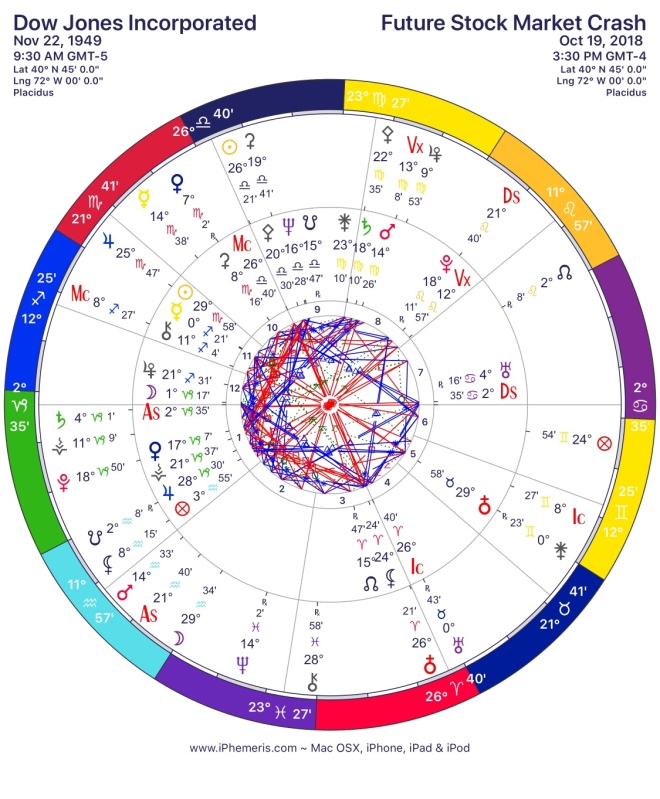 When looking for this chart in my files I found that I had made dozens of charts in or around this period over there last year but had sort of ignored it until now- how history repeats itself!

Anyway, as you can see in this chart transiting Neptune will be exactly inconjuncting natal Neptune. This is loss on a major scale by forces beyond our control. In this chart you can see that the transiting Saturn will oppose the natal moon of the market. This chart has more to

Do with the stock market then anything else but as it has historically been a barometer of the economy I think it’s important. I will look into other indicators and if I find solutions to help people

Protect themselves I will post them and go over this stuff in YouTube videos. I find it is often easier to post stuff in my blog – so for quicker updates check here. The videos will be used as an overview.

Get involved! The more of us who do the better the ultimate outcome we will have.

May the Great Spirit Bless all of you! Happy holidays!🌟