I’m putting up the solar charts of Devin Nunes and Adam Schiff with their transits. Originally there was a chapter of the Trump book with an interpretation of Devin Nunes chart. I will cut and paste that into another post. Mind you this will have been written about 2 years ago. I hadn’t bothered to put it in the book because I felt I should more narrowly focus the book on Trump and the timeline. Below you’ll find the two leaders of the inquiry’s charts.

Again we see the interesting pattern of the Uranus conjunction to the Sun in Nunes chart. This was a theme I saw in not just Trump but all the people around him when I was working on the book. I had originally cast a wider net but the book was getting out of control and the people around him were being fired at record pace. If there would ever be an American Coup, it would require this configuration of individuals with strong Uranus conjunctions to their Suns. While these individuals can be highly visionary if they are healthy and well balanced, the big danger of this conjunction is that they are highly unstable, prone to radical thinking and conspiracy theories, intellectually stubborn know-it-all’s who only keep their own council, they don’t trust anyone but themselves as this is a signature of people who suffered from neglect and a need to figure everything out on their own as children. Hence they have no trust of authority, norms or other people’s feelings or opinions. It also makes them erratic, eccentric and prone to outbursts and rebellious behavior. These powers have been used for good, think the American Revolution, when this energy was harnessed for the good of humanity. But as we can see this energy is also extremely destructive and rebellious. One could make an argument that our Democracy does need reforming and perhaps this is why the Great Spirit has enabled this group of Uranian figures to cause enough chaos in our system that we need to put the pieces back together. Looking forward into the charts of the US I have to worry that the pieces will not be easy to put back together and are ushering in a period of instability and further radicalization. But I hope this is a misread, colored by the energy of the present time.

Adam Schiff as you can see is much more traditional with a strong sense of patriotism (cancer rules this feeling). He has a strong conjunction of Venus and the Sun giving him a fair, even handed and easy going nature. In his solar chart he appears to have Mercury Peregrine in Cancer in the first house, making the emphasis of his chart focused through this unaspected planet. He has become the designated voice (Mercury) for the the traditions and norms of our country. He is ambitious and serious with Saturn in its natural placement of Capricorn and lucky with Jupiter in its natural placement of Sagittarius.

So below will be the transits starting the day out for the inquiry of the two leaders. As I’m writing this Roger Stone (breaking news) has been convicted of all 7 counts. I’ll have to look into his chart as well in another post. 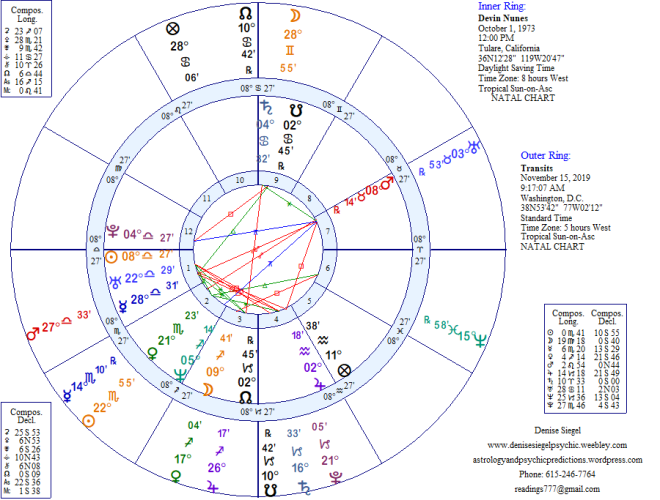 So transiting Mars is on his natal Mercury and Uranus is approaching Nunes solar Mars in the 7th house. Other than that we don’t see a lot of activity – this seemed apparent from his opening statement. When I watched it I turned to my husband and said I could literally feel the ground crumbling around the Republicans. He felt the same way.

So interestingly we see that Schiff has Uranus (as he has been thrust into the public) has (now waning) conjunct his natal Mars in his solar 11th house. He is also in the middle of his Saturn return and a Jupiter return! Wow, he has risen to prominence for a reason! Neptune is also approaching his South Node in Pisces and the Moon will cross over his ascendant as the proceedings go on. Schiff was the right choice, he is reasoned, and serious – Saturn in Capricorn returning, makes him more sober, more structured and controlled. Also the Jupiter return in Sagittarius also adds the luck element to his chart and the Moon going over his solar 1st house cusp tells me the public will respond favorably to his conduct today. On the other hand Nunes will appear contentious and unruly – mars aspects alone with no positive supporting aspects. He will be seen to be as Trump puts it, “low energy,” and incendiary rather than triumphant.

Below is the except from the book that didn’t make it into the final version:

I’m adding here the information from the original chart reading I did on Devin Nunes while working on the Trump book. Here it is:

Although we don’t have a birth time for Devin Nines we have plenty of information in his solar chart to understand his psychology and answer some serious questions about why he is being so protective of the president over the Russia scandal. Sun, Pluto conjunct in Libra – he identifies with people in power. His ego is wrapped up in relationships with powerful people. He is a social climber and wannabe plutocrat. Uranus conjunct Mercury in Libra, he’s a revolutionary thinker, interested in subverting social norms, and since it is in Libra, laws. Interestingly, the other big player Donald Trump has Uranus conjunct his Sun – he at heart is also a revolutionary, a rebel an outlaw, a shit stir, a provocateur – Devin Nunes speaks this language albeit in a more polite (Libran) way, he’s more interested in the legal ramifications then in the communication aspect of revolution, but non the less – he desires the breaking of laws and social norms. This doesn’t have to be a bad thing. This aspect could choose to do so for the greater good. Uranus is a rebel, but sometimes rebellion is necessary – good, helpful. Change isn’t bad or good – its all context and intention. In someone else’s chart this aspect could be expressed very differently. Uranus conjunct Mercury can make a person amazing at new technology, it can also make a person an out of the box thinker – brilliant even. Astrology is context.
There is a very interesting Yod in his chart – one that could be revealing about what happens to him. Neptune in Sagittarius is sextile Jupiter in Aquarius both of these make an inconjunction to his natal Saturn (in his solar chart it’s in his 10th.) Saturn itself is a the planet that rules one’s career – so this is a double whammy in his solar chart – this Yod will be about his profession it could also effect his father and since it’s in Cancer – his Mother and his whole family. A little background about what a Yod is – a Yod is two planets sextiling that both inconjunct a third planet. The configuration has to be tight within a few degrees to be considered a true Yod. Astrologers reference Yods a lot, but finding a clear answer about whet they are and what they do is more difficult. A Yod is called “the finger of God,” the name tells you a lot about the underlining gist of the aspect. It is the inescapable, fated, unavoidable. In western astrology we tend to look at most things as energies that we can control – free will dominates fate. The one exception is the inconjunction. The inconjunction is an outside force you have no control over that forces you to react. In the case of a Yod it is as if forces inside you push you to do things you don’t fully understand. Your life has a fated feel, perhaps a sense of mission – you may even behave in ways that you don’t fully understand. When that internal Yod is triggered events are out of your control, you are swept up in a tide of destiny.
When my Yod was triggered I met my husband and when triggered again I had my daughter. Both life changing events – both things happened unexpectedly. In the case of Devin Nunes Neptune, Jupiter are sextile and inconjunct his Saturn at the top of his solar chart. This indicates his being swept up in what appears to be an opportunity that will correct his career path. With Neptune part of this Yod, loss is part of this correction in Jupiter it has to do with foreign nations, scholarship, books, colleges, foreign trips and foreign countries or foreign people. Jupiter also rules other countries and reiterates the Neptune in Sagittarius in Aquarius it indicates new technology, television, new media, revolution, breaks of convention, rebellion. The point of the Yod Saturn in Cancer in the 9th solar house, indicates unseating of family, domestic career through involvement with foreign cultures (9th house.) When this Yod is triggered a correction to his career will occur.
So what kind of guy is Devin Nunes? His Sun conjunct Pluto in Libra make him power orientated. Naturally, Pluto rules Scorpio – sex, death, power, secrets, occulted information, conspiracy theories, things below the surface – in Libra its emphasis is on culture, aesthetics, law, relationships. So Nunes likes to be in partnerships with powerful people. His Uranus, Mercury conjunct is nearby but not conjunct these other planets. Venus which rules all his planets in Libra reiterate his fascination with power. His Neptune conjunct the Moon in Sagittarius really fits his odd relationship to the Russia scandal. Neptune causes confusion and when it is conjunct the Moon – the person is easily caught up in their emotions which are defuse and difficult to understand. This configuration can lead to a lot of emotional confusion. He could be easily horn swaggled by a foreign power or foreign influence (Sagittarius=foreigners and foreign lands.) He could be very spiritual, or caught up in a guru type relationship with others. He maybe a bit gullible. With his need for approval from powerful people, his eccentric thinking style and gullibility – he is the perfect patsy for the Trump White House. He will gladly do the dirty work as trade for a piece of the power he desires. His Neptune/Moon conjunction making an inconjunction to his natal Mars in Taurus are worrisome for him – when reality breaks, he may not be able to incorporate it. He could become a danger to himself. His Jupiter in Aquarius also squares his Mars

One thought on “Day 2 of the Impeachment Inquiry”