After a successful career as a psychic an astrologer (named “Best Insight Seer,” by the LA Weekly — they didn’t like the word psychic) my other career as an artist took off and I went into retirement as a psychic. Not that I could turn off my “gift,” or curse as I called it sometimes, but I stopped doing readings for the public as it interfered with my other work.

I have come out of retirement now because we are on the precipice of a major S-storm which I’ve been feeling for the past few months. As far as I know, and was told the LA Weekly, the paper has never before (or after as far as I’ve seen) picked a best psychic in their best of LA issue which is put out once a year. And lets face it LA is chalk full o’ psychics you can’t throw a rock without hitting one in the third eye. This is part of why the LA Weekly (besides their innate skepticism which I’m down with) they don’t hand that title to people.

Here is the promised scan of the LA Weekly’s Best of Issue referred to above. 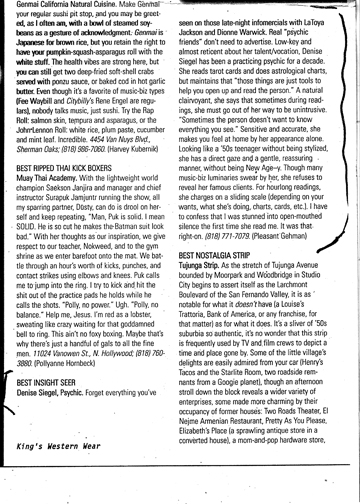 Because it’s difficult to read I transcribed it into word and here’s it is in readable form:

Best Insight Seer: Forget everything you’ve heard or seen on those late-night infomercials with Latoya Jackson and Dionne Warwick. Real “psychic friends” don’t need to advertise. Low-key and almost reticent about her talent/vocation, Denise Siegel has been a practicing psychic for a decade. She reads tarot cards and does astrological charts, but maintains that “those things are just tools to help you open up and read the person.” A natural clairvoyant, she says that sometimes during readings, she must go out of her way to be unintrusive. “Sometimes the person doesn’t want to know everything you see.” Sensitive and accurate, she makes you feel at home by her appearance alone. Looking like a ‘50s teenager without being stylized, she has a direct gaze and a gentle, reassuring manner, without being New Age-y. Though many music biz luminaries swear by her she refuses to reveal her famous clients. For hour long readings she charges on a sliding scale.

OK, so I forgot to mention I also wrote a horoscope column for the short lived magazine, “LA Innuendo,” and have published poetry, had a one act play produced by a theater group in Los Angeles, had a band, am a photographer and a visual artist who is represented by gallery 825 in Los Angeles (recently had a solo show there) and had haiku published this summer in a chapbook with a group of other artists. The book is called, “Haiku Not Bombs,” and here’s a link to it, if anyone is interested:

You can contact me for a private reading through the e-mail: readings777@gmail.com

Archive of Denise on Coast to Coast