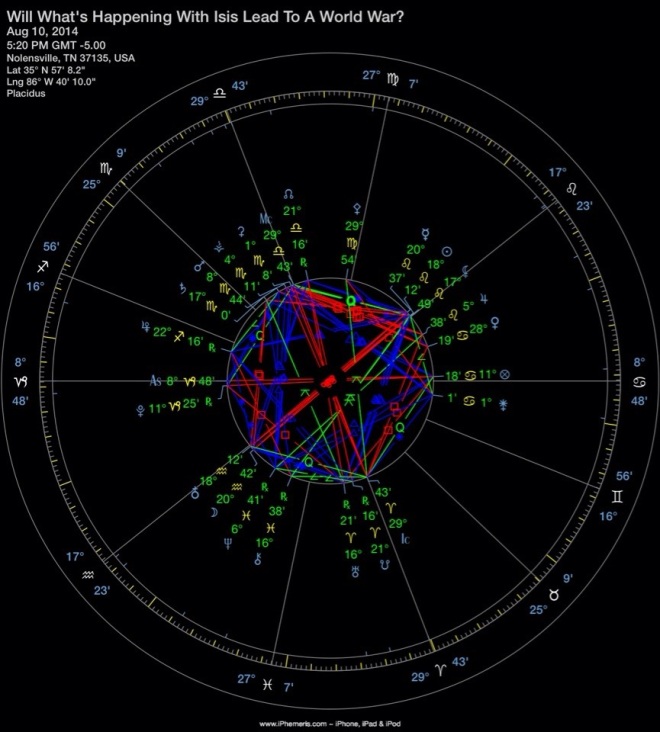 You can see the question I asked the horary chart. I used the 11th house to represent ISIS and the 9th house to represent the world. The 11th house is ruled by Pluto (already a bad sign) and the 9th is ruled by Mercury. Although they are not making an aspect yet. It is traditional to use the fastest moving planet to answer the question. In this case it is Mercury which will go into Virgo and trine slow moving Pluto. Answering the question with an ultimate yes – down the road when the secondary progression happens. Give that one degree for one day and this conflict could escalate to world proportions as early as 6-8 weeks. The second thing we need to look at is the moon which will make a sextile to Pluto in roughly the same amount of time. It is currently making an opposition to Mercury which would support a no answer however it is slightly waning which invalidates it as an ultimate answer and shows that the world does not see this as anything global – not yet. But as these other things are brought to light in the next 6-8 weeks opinion will change and the breadth of this will be revealed. This could also be the thing that is reflected in the downturn/crash chart I posted the other day. The moon being a fast mover will make a quincunx at about the same time but in another month it will make a trine. So it seems to me there will be a ramping up and a holding back. Very likely the ramping up will be hidden from the public purview. It doesn’t seem likely now that this will be anything more than a contained middle-eastern war but it won’t stay that way. When I first laid eyes on the chart I got goosebumps. It gave me the creeps. Pluto in the first house says everything one needs to know about the destructive deathly bloodlust that typifies this group.

Isis = Eris? Will it be the apple thrown to the world that sparks WWIII? I’m reposting this as you can see by the date of the chart it was from August 10, 2014…