I’m dedicating this entire post to Malayali’s question of what the future holds for NIFTY.  Malayali has been very patient and done a lot of research to bring insight into the stock market side of what is going on in India.

Let me remind everyone again, I’m not a financial person, just a monkey with an ephemeris, tarot cards, computer and some astrology charts. So try to bare with me.

Here is an explanation from Malayali on what NIFTY is and then the chart and analysis will follow.

Hi Denise, thanks for your humble reply. With lot of respect… here are some details regarding NIFTY. The National Stock Exchange of India Limited or S&P CNX NIFTY (NSE), is a Mumbai based stock exchange. It is the largest stock exchange in India in terms of daily turnover and number of trades, of both equities & derivative trading. NSE is also the third largest stock exchange in the world in terms of number of trades in equities. Though a number of other exchanges exist, NSE and the Bombay Stock Exchange (BSE) are the two major significant stock exchange in India, and between them are responsible for the vast majority of share transations. The NSE’s key index is the S&P CNX NIFTY, known as Nifty, an index of 50 major stocks weighted by market capitalisation. The Standard & Poor’s CRISIL NSE Index 50 or S&P CNX Nifty nicknamed Nifty 50 or simply Nifty. The Nifty is a well diversified 50 stocks index accounting for 21 sectors of the economy and is the list of bluechip stocks listed on National Stock Exchange of India (NSE) (nseindia.com). Nifty is used for variety of purposes, often used as the benchmark of trading the health of the Indian Stock Markets, and also used for benchmarking fund portfolios, index based derivatives and indux funds. Nifty 50 Index started with a base value of 1000 on November 3rd, 1995. I hope you won’t disappoint your friend. I believe, that your predictions will hit the desired targets. Expecting your valuable advice & comments on NIFTY….. your friend, fan & believer….. malayali….. (Life’s Highest Value of NIFTY Index = 6357.10 dated 27th November, 2008) & (Current Value of NIFTY Index = 2752.25 dated 26th November, 2009). But today, 27 th November, 2009….. both NSE & BSE is closed due to the terror atacks on Mumbai. For more details & NIFTY charts, log on to : nseindia.com 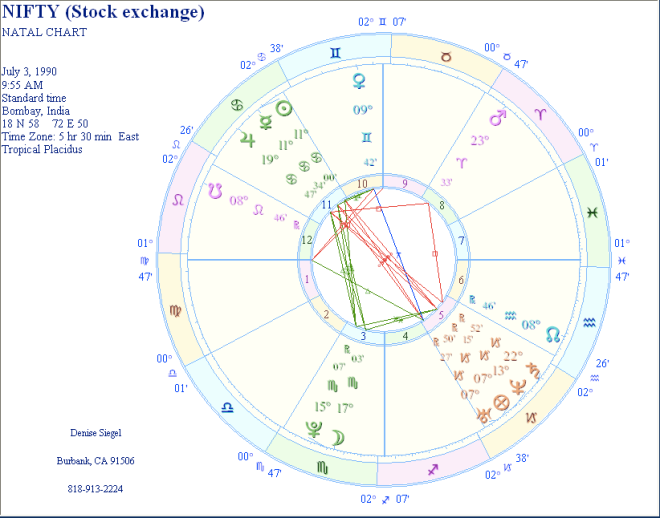 The information Malayali gave will hopefully help those of you who are more familiar with how markets work. Again, I’m just an a psychic and an astrologer so I’m just going to go with my intiution and what the stars point out.

It’s interesting to me to see how the problems in this market are manifested very differently then in the Dow Jones or NASDAQ charts. It is Jupiter in Capricorn going through the 5th house (of speculation, Jupiter = foreigners) conjuncting the stellium there and opposing the stellium in the 11th house. I know in Vedic astrology Jupiter is the great beneficent and Saturn the great Malific and in this case Jupiter is opposing itself and later conjuncting Saturn (also in Vedic astrology there is no use of the outer planets, Pluto, Uranus or Neptune.)

Basically, this means that it is foreign markets making investors nervous and causing a see-saw effect; this aspect would have been felt strongly during our crash at the end of October, but would have been felt as early as January of 08 when there may have been technology jobs lost in India for some reason, and feelings among astute investors that something didn’t seem right. This little period of instability would have gone on until mid-late February of 2008 and then there would have been a period when investors would have felt safer again, and been lulled back into complicity. The big wake up call being this fall.

The good news for NIFTY is this market is very strong, and really its the global market that is causing problems here, right now. Those problems will get worked on, even fixed over the next few years. It’s not until February of 2011 that there will be unexpected, out of the blue troubles, mostly again with the work force, and more then likely with technology jobs. This will cause a big adjustment in the market at the time and by May of 2012 will very likely lead to value being lost in the market, especially companies that deal in technology, communication or communication related jobs. I wonder if this will be because laws will be passed in the US giving domestic companies greater incentive to hire US citizens instead of outsourcing these types of technology related and communication related jobs to India, reversing the current trend. So watch for that in the next four years.

This will be the start of a major adjustment of the NIFTY. And will be when NIFTY will have its version of what we are seeing here in the US, but I’m sure not to this extent because by then there will be even more laws in place protecting the world markets, but still, there will be a tremendous amount of Pluto aspects going on, so you will see this market restructured starting with this out of the blue crisis in 2011 and then some major restructuring starting in December of 2013, and later some big losses for investors about a year later when Pluto conjuncts Neptune exactly in the 5th house of speculation. So I would say to anyone at that time, pull your money out well before that time, and put it in something safe or in another market until this market goes through its period of adjustment.

It will have one very bad last readjusment when Pluto conjuncts NIFTY’s Saturn in the 5th house and square’s NIFTY’s Mars in the 8th from about 2019-2020. This could be a much bigger problem for India, I’m going to look at India’s chart and post it right now. Here’s the chart of India: 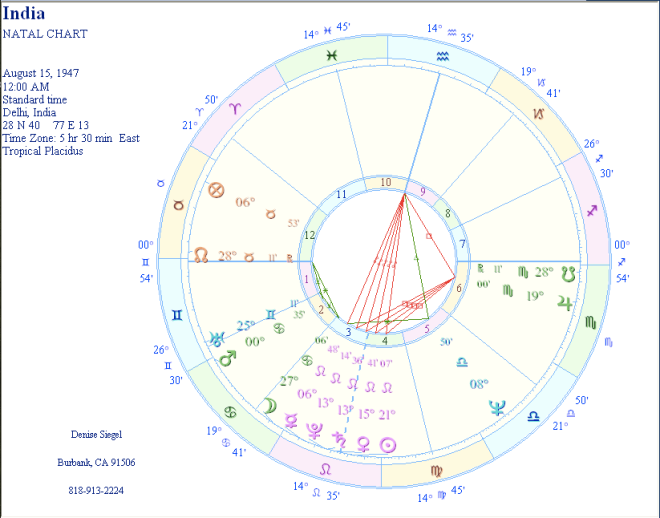 Based on this, I’d say there will be some sort of a global crisis. It could be the climate crisis, a major famine or drought or natural disaster, something that will impact everyone and make trade, business and the economy seem very small by comparison. That being said, I hope I’m very wrong.

Hope I have shed some light on NIFTY. If you have a specific question, something I could ask the tarot in a yes/no spread, then please feel free to post it and I will answer it as soon as I can.

Best wishes to all and many blessing to you,