OK, there is a crazy negative campaign going on here in CA. Our old governor Jerry Brown is running against former E-Bay CEO Meg Whitman. Her campaign has been a seriously nasty one, whether you love JB or not, it’s pretty hard-core, mean and full of lies. She’s been called out by major newspapers all over the state for flagrant truth stretching, and downright inaccurate and misleading “information” about JB.

Here in CA the stories abound about her as a notoriously horrible and mean boss. Of course this could be said of a lot of people in her position I’m sure. But she’s garnered more enemies than friends and the vast majority of her campaign funding has come from her personal E-Bay coiffers.

Well, anyway one of you sent this very funny separated at birth picture and asked me to put it up for laughs. It really is remarkable how much she looks like Lon Chaney Senior. 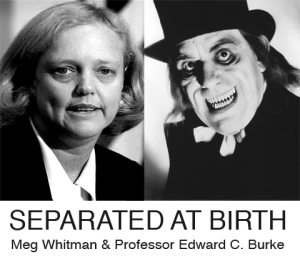