Hi everyone, thanks for participating in the dream journal. Already I’ve noticed some interesting patterns, not sure if anyone else has. There seems to be a lot of water and chaotic dreams. Interesting to note someone had a dream that they posted under year of the panther that stated they saw a panther walking down the street. My husband also (without my having told him of my pulling it) pulled the black panther card.

Please keep using the Dream Journal as your personal repository for your dreams. As themes start to suggest themselves we’ll take a look at them and see how they interact with the world at large. Also you can print out your dreams and paste them into a dream journal for your own records. Dream journals are really remarkable, often when reading mine from years ago I found things that eventually came to pass. Sometimes having dreamt about things as far as 10 years down the line. So make use of it!

The first question comes from Curious:

Hi Denise,
First, I hope all is well. I was just wondering. You haven’t really given any updates about Pres. Obama and family (Michelle Obama from previous predictions), the Illinois mess surrounding him or his cabinet choices. I also was wondering, what is to come for him in the first 100 days after he is to be sworn in? What about his ballout?

Once again thanks alot!

I know some of his appointments have been a disappointment, for me his choice to appoint Ken Salazar was the deepest however he did appoint Steven Chu a Nobel laureate in physics to lead the Energy Department. I know our Senator, Diane Feinstein scolded him for his choice of Leon Panetta to head the CIA due to Panetta’s lack of experience, however as my husband pointed out, this could be because many people within the intelligence community have their hands dirty from the torture issue and Guantanomo. He may have decided to rely on someone outside that circle in order to have some perspective. As for Salazar I was happy to read he is a staunch conservationist and that he is balanced by a Nobel laureate. It appears Obama is putting together not just a team of rivals but one where there is a multitude of opinions to draw from, none however being from the super left which isn’t a surprise. Obama has never claimed to be left of center, neither was Clinton. Actually there hasn’t been a president who has been anything but a centrist or at least played the game as a centrist since Kennedy or FDR. Certainly Reagan, Bush I and II were radical in many ways, Reagan slashing the social net to pieces and Bush II turning capatlism into the wild west and then socializing it. I really want to reserve judgement about Obama and his strategy for the first year because it is my gut he is going to turn out to be a really good if not great president who will solve some of the toughest issues we’ve yet faced and I don’t think one does this by surrounding themselves with a team of people who are in harmonic agree-ance a with ones own opinions. We saw how that worked with Bush II. He had nothing but Yes people around (other then the duck man, Cheney who appeared to be a Yes man but was really a weasel stealing power whenever possible). Arguments, disagreements and healthy debate are good for solving big problems. I don’t think these appointments speak to his absolute take on things but rather his openness and desire to get people involved in his administration who have more experience then he does. I’ll have to admit though, I was a disappointed at first and felt a little betrayed but just because he’s hiring these people now doesn’t mean they will be with him throughout his administration either. So, again my intuition tells me he’s doing this to encourage debate among his staff and to get people to think outside their boxes which is ultimately a good thing.

To answer the other questions about how he’ll be treated in the first 100 days as I mentioned in a much earlier post from before the election, I’m sure there will be people trying to pin the financial mess on him. He’s not going to have an easy time of it which is why I feel its important to see how he does and lend him some trust. He is an incredibly intelligent man, and his strategy maybe more complex then something someone like say, George W. would use, perhaps this is why it will be beneficial.

And the bailout, I feel will be an ongoing process which will require years of restructuring. It isn’t going to be like the Bush bailout which ultimately was more akin to throwing a napkin over a bale exploded barf, then an actual solution. It was more of a nod to the rest of the world saying, “See we screwed things up, but we’ll clean it up.” But we really didn’t end up doing much. The Obama administration will end up with the mop and bucket and it will take some time to scrub down. It’s my feeling that Obama is also going to instate some new house rules like, “No getting crazy drunk on taking advantage of investors and the American people.”

The next from Capricorn777:

wishing that your little daughter gets well soon.

The New York Stock Exchange was established on May 17, 1792
New York, NY

and NASDAQ was established on
February 8, 1971
New York, NY

I’m going to post this charts with the alternative dates for the stock exchange and the NASDAQ and let you know what I see.

I was reticent to do this because my software (Kepler) which has an excellent database for financial astrology gave different information. I posted the charts already that came with the software but it does seem to be off. And upon a cursory examination this time, it looks like this old Stock Exchange chart maybe more accurate, we shall soon see. If the market doesn’t hit an all time low in Feb-March of this year then this old chart should be the one astrologers use from now on as the nodes are in 0 degree cardinal signs which when Pluto passed through this past September 29 and throughout October would have made a terrible grand cross and would have reeked havoc, which seems to have been the case.

Since I didn’t know if the market would have started way back when at 9 or 8 or as it does now at 9:30. I picked 9. I figure they were early risers and would have started by then. I also did the NASDAQ chart for both 9 and 9:30 because I wasn’t sure how new the half hour mark was as the start. It seems like an oddity that came this century to me in order to accommodate the coasts and world markets. OK so here goes: 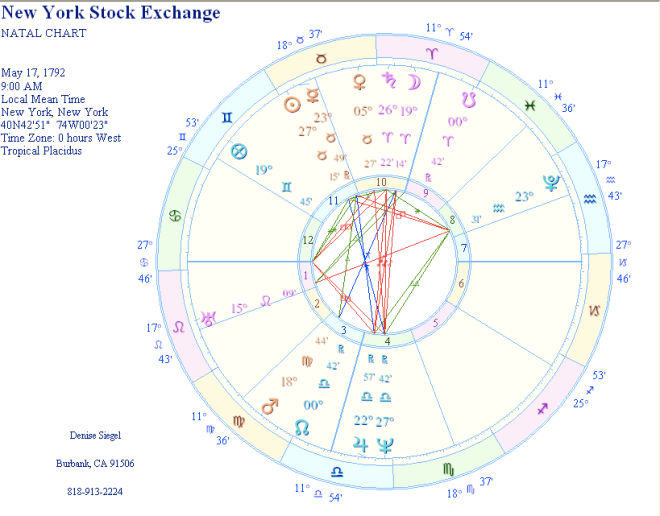 Lets hope for the sake of the NASDAQ that they traded earlier when they began back in 1971. Otherwise not only will Pluto hit this NASDAQ’s Venus in Capricorn at 3 degrees this spring but it will also hit the 10th house cusp making the situation much more extreme. If trading was done back then also at 9:30 then the spring will not only show huge financial losses as Venus rules money and Pluto death, transformation and endings but with the 10th house it may indicate a change in the structure of the NASDAQ itself as Pluto first hits Venus, the way business is conducted might be restructured to save institutions. This big Pluto hit could mean the loss of more jobs among those companies traded on the NASDAQ when Pluto hits the NASDAQ’s 10th.

Also it is interesting to note that Neptune was conjuncting the NASDAQ’s Sun a few years ago, this would have caused delusion among stock holders, the sense that the impossible had suddenly become possible and the theoritical a reality. There also would have been a lot of lying and deception going on by companies, institutions, and brokers about the health of companies on the NASDAQ.

That being said give it awhile and the NASDAQ will come back stronger then ever, after the restructuring takes place and when Pluto starts to make a trine to the part of fortune. There will be more tech jobs created here in the US again and a wave of good economic health for companies involved in the NASDAQ but this will take awhile. I won’t bother to look it up in the ephemeris because it will be years from now. I’ll post about that when it gets closer.

Generally this NASDAQ chart shows a lot of return for investors under normal circumstances. It’s interesting to note that when transiting Pluto was conjunct Neptune, Jupiter and finally Mars, in the 8th house back in the 1990s, we had the crazy technology, internet bubble. This would fit perfectly with those aspects. I’d have to say this chart looks very accurate to my eye so far.

Now for the chart of the New York Stock Exchange started way back in the 18th century.  Here we see the nodes at exactly 0 degrees Aries and Libra, both making an exact square to Pluto back in the fall of 2008. If this chart is off by an hour and the start of the market back then was at 10 AM which could be possible, then we would see these nodes in the 2nd and 8th houses, making this a hard hit for the Stock exchange as those points would represent jobs (2nd house) and banking, brokers, financial advisors and investors (8th house). Let’s hope this is the more accurate chart making the hit this past fall the worst of it. I’m going to check this chart against the 1929 crash and do a comparison post to see if maybe there is a way to verify its accuracy or inaccuracy. If this chart is inaccurate and the previous Kepler based chart was accurate, then we have the worst of it coming really in March of 09.

Hope this is not the case.

May 2009 bring your greatest dreams and wishes to fruition,