I plan on answering those questions I promised to answer tonight via horary astrology. I’ve had great success finding lost stuff, let’s see how it goes for more abstract questions. Please keep me posted on the situation when it comes to pass.

Denise, will you do a Tarot reading on the SAG strike/greed out here in Hollywood? I’m sick of the news wavering so badly. My gut tells me they are smarter than that knowing better not to put us out of work again but I just don’t know anymore.

I’d just like to know if they’re going to strike and if it’s going to put a lot of people out of work again.

There are so many questions I would love to ask you. Thank you so much for everything. Hope I don’t post comments too much…

Post as many questions as you like! I’m happy to be able to have a dialogue with people. That’s what the site is really for. So don’t worry about it. I did a tarot reading to see if SAG was going to strike in the next 6 months it came up no for the next 3 months, and a potential yes once 3 months are up, so I guess that would be around spring. But to be extra thorough and to see what divination system is better at handling these sorts of questions I did a horary chart based on the time you posted the question. So here it is with an explanation.

This is a difficult one to answer according to the chart. It does seem to indicate that there won’t be an immediate strike, but one will eventually take place.  I would say when this chart progresses to the point of Mercury conjuncting Jupiter. So let me look at when that will be. OK, according to the horary chart the strike could be as early as the end of this month. I really hope that’s not the case. In all fairness to horary astrology universal questions are not supposed to be its strong suit so we’ll see. Unfortunately, both divination systems seem to say there will be a strike. The cards predict in  a few months, the horary chart at the end of February.

Next question comes from an anonymous person about the gold market.

This person wanted to know when the low point for gold would be in the next 3 months. Here’s the chart. 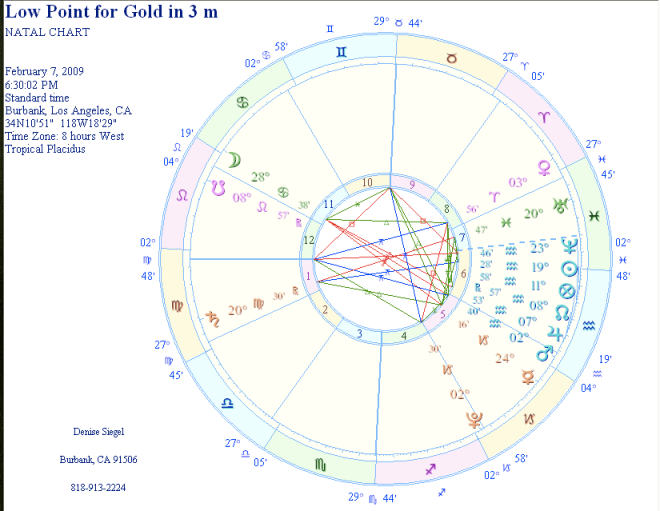 From the looks of this chart, it would seem there won’t be a low point, that buying low in the next few months won’t be possible. The window of opportunity has passed for now. And there was one other question this person wanted answered. Will gold keep rising until 6/21/2009? Here’s the chart:

The answer to that is basically, yes. It may not be straight up. There maybe days when it levels off and sort of plateaus, but it will continue to trend upwards until at least that date of June 21, 2009.

And the next question was from Sunbeyond:

Regarding the question asked before about commercial real estate: Will the company SPG be heading towards 20 dollars from its current price of 40s anytime soon? 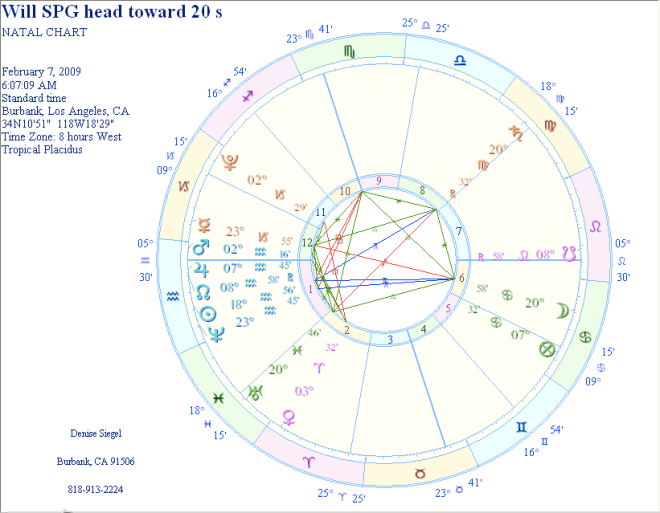 That would be a strong yes. I won’t bore you with why. But yes this company is going to trend from the 40s into the 20s.

I hope you all are having a great weekend and I will get to more questions over the next few days.

Best wishes to all and many blessings,