Thanks everyone for posting the 2nd inauguration time. I’ll run a chart for it over the weekend and post it with analysis next week at the latest. There were a lot of really interesting comments, many of which will probably take a whole post to answer so bare with me as I address them over the next week. Don’t be discouraged if you don’t see your question answered immediately, I will get to it.

Andrew had asked about Lehman Brothers in an earlier post. I asked him if he had an incorporation date in response to his first question as to whether Lehman Brother’s was going to get out of bankruptcy. The little bit of research I did to find an incorporation date tells me Lehman Brother’s has already filed chapter 11 and is in liquidation so it seems pointless to go much more into this but I’ll post a couple of charts related to them. One was in my database, the other chart was based on a readers information which I couldn’t find corroborated anywhere. The problem with a lot of these financial institutions is that they morph and change so much and depending on how big of a change they make, it can mean they end up with a new chart. For instance if you were married and did a chart for that marriage but then got divorced and ended up re-marrying your husband, the second wedding date would be the new chart for your marriage. The original marriage chart would not be useful except to speak about the past. So its not easy chasing down all these companies and their chameleon like incorporation, merger, going public, etc. dates. And depending on the issue at hand, one of the company charts might apply more than another one.

Here are the Lehman Brother’s charts I ran:

OK, based on the incorporation date chart given by a reader, Pluto ripped them a new one right through their 7th, legal issues, partnerships, open enemies, then through the 8th house of death, rebirth, investments, and other people’s money and then continued to rip through the 9th which would be all things foreign. That’s a lot of Pluto conjuncting almost everything in their chart for a long time, really at the start of this incorporation date. They should have consulted an astrologer! Not an easy road to hoe there. It would have been surprising if they could have actually stayed in business. It’s sort of amazing they made it through all of that according to this chart until Pluto finally hit Neptune in the 9th exactly at their time of bankruptcy. Of course Neptune rules loss, and death, the 9th would extend the bankruptcy to any foreign division and they would have not only lost their investors money here in the US but all over the world. Yikes, that was not a good time to incorporate at all.

Now the other chart is not nearly as bad, the one from my database but when Pluto hit the cusp of the 6th house, which should have been toward the end of December if memory serves, then it would have been clear there was no saving the situation and people would have been laid off and the doors would have started to close. However it does look like when that Pluto opposition happens and actually finishes off the company, investors will get some money back through the liquidation process. It will be less of course then they would have gotten but at least there will be some pay out to people.

I’ve also had a question about Goldman Sachs so here are again 2 charts, one for the newest change over from an investment bank to a holding bank and the other I think is their incorporation chart. Both are important but the newest it seems will help save them in the long run. 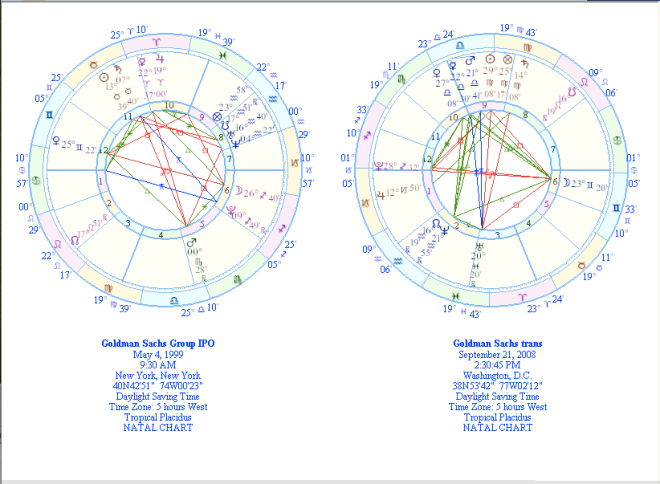 The 1999 chart is an unfortunate one and as the planets transited through it, shows how and why the company was bound to fail. With Neptune and Uranus conjunct the south node in the 8th house, they were apt to be delusional, risky and repeat stupid mistakes they had made in the past. That Neptune there is a hard one to work with as it really indicates loss of investors’ money, and in Aquarius, its from being too unconventional. Uranus there shows they were willing to take too many risks with their investors money on ideas that were ungrounded in reality. When Pluto went over their Moon in the 6th this would have caused things to come to light, collapsing their reputation and making people pull their money out of the company. There would have been tremendous fear at that time. More then likely a lot of employees were also laid off at that time as well. Interesting to note that the Moon rules their chart and also real estate. Pluto in excessive and reckless Sagittarius (no offense to Sagittarius people this is the negative side here I’m talking about) hitting the emotional moon which rules not just their real estate ventures, but their public persona and reputation changed dramatically, this triggered them to go into freak out survival mode. They then filed in court to become a holding company not an investment company thereby changing their fate.

The new chart shows Pluto going through their first house which means they are trying to give themselves a big make-over and lure the powerful back into their web. It looks to me like they will find a way to survive this storm in the long run. It may take them awhile to build their momentum back, but by changing to a holding company they probably saved themselves from doom.

Best wishes and many blessings,