More questions from readers. The first from Cathy:

Denise, Thank you for the charts on Boeings. Here is some info on Airbus that I found -Airbus Industrie was formally established as a Groupement d’Interet Economique (Economic Interest Group or GIE) on 18 December 1970.
2000 three of the four partner companies (DaimlerChrysler Aerospace, successor to Deutsche Airbus; Aérospatiale-Matra, successor to Sud-Aviation; and CASA) merged to form EADS. If this doesn’t help – I’ll keep searching but I appreciate your efforts of trying. Happy Thanksgiving to you!

I was about to run a chart when I realized I wasn’t sure which market Airbus was traded on because I think its a European company? And if this date you gave was the start trading date or the inception date or incorporation date, so let me know what more you dig up so I can run a chart. Sorry about that for now.

Thank you for your analysis and insights. In these troubled times on a lot of fronts ( financial, physical and even spiritual ) you provide clarity and hope.

I have two questions.

1 – Urban survival. In which timeframes do you see possible shortages of food and basic necessaties?
2 – When will the dollar downtrend and demise commence?

To readers of this blog, please do google “urban survival” and make some basic preparations.

It’s funny to write that, it’s like I’m writing to a part of myself. Jokes aside, I’ve given this a lot of thought. I think your suggestion to google urban survival is a good one. It’s always good to be prepared. That being said, I’m not getting the feeling we are going to see the economy drive us to the point of the things our grandparents and great grandparents went through. I’m not feeling it’s going to get that bad now. I feel there is a safety net being built that will cushion the blow and we are going to have to change our ways, but its not going to get to that extreme. I asked the cards if we will see the economy drive us to extremes and the cards said very emphatically, No. That’s not to say they don’t tell of hard times, anxiety, and major changes.

However, your point about urban survival should really be taken in terms of natural disasters. I live in earthquake country. Everyone lives somewhere that could be devastated by a major flood, drought, hurricane, tornado or earthquake. And I do feel that environmental problems of that kind are going to continue to spiral out of control, and we all need to be prepared for that.

My biggest fear right now is that the economy will defocus us from the real problem, and that is the environment. It doesn’t matter how many gold bars you have hidden under your sofa if your house is floating down a river. That’s kind of the situation we’re in. Believe it or not, this crisis has helped to focus us on the big picture to some extent, but its still not big picture enough. We need to go wider, broader. We are literally going to kill this planet — leave it barren, if we continue down this path.

As a teenager (back in the 80s) I made a disturbed illustrated children’s book about these little bugs who were slowly eating away their host. Great idea for a kids book, huh? It was of course a metaphor for us killing the planet. I told a much older hippy type friend about this, and he said, “That’s just egotistical, man. The earth is so much bigger then us, it can survive anything.”

And I said, “Have you ever heard of cancer? It starts out as one cell and multiplies until it destroys everything.”

Anyway, of course he thought I was nuts way back in the 1980s when I mentioned us destroying the planet. But I could feel it, and we were and are. My worst fear is we’ve waited too long to do anything about it. We have to make this our number one priority, seriously. Once we get things back on track, if we don’t use everything and do everything possible to solve global cancer (warming sounds like a vacation) then we’re all going to parish and there won’t be any future of our race.

Hi Denise:
Great postings!
Wondering about Citicorp (c). I think you ran a chart, but I didn’t find the interpretation for it. Given recent bail outs, will it survive?
If you have time, I am wondering about US Steel (x) and Freeport-McMoRan Copper and Gold, Inc (FCX), Google (GOOG), Intel (INTC), Foster Wheeler Ltd. (FWLT), Procter & Gamble (PG), and Burlington Northern Santa Fe Corporation (BNI).
Many Thanks,
Wei

I didn’t have Google, Foster Wheeler, Burlington or Freeport-McMoRan in my database. And of course had multiples of the other stocks you were interested in. I’ll post them and do some analysis. In the mean time if you want me to look into those not represented, post the incorporation date or the start trading date of these company’s where they are traded and I’ll run charts on them. Here goes: 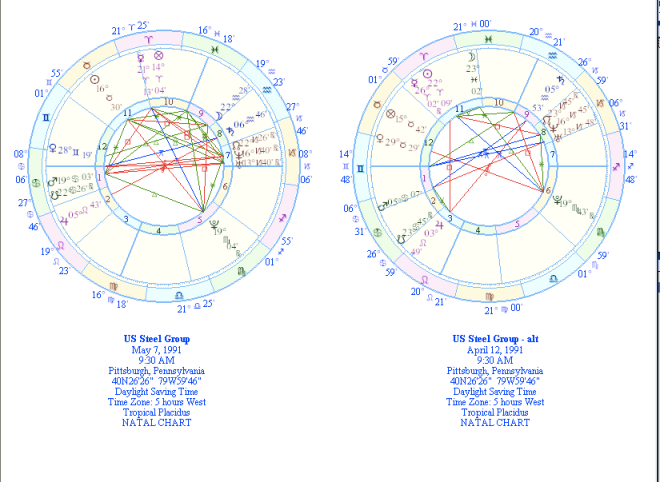 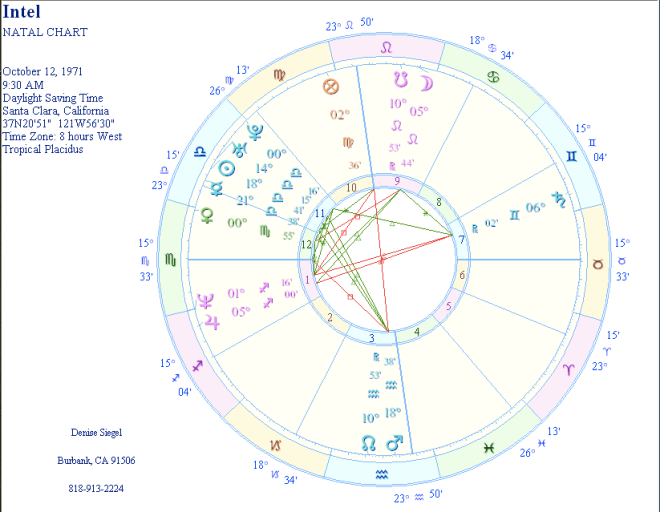 OK, I don’t know if Citicorp has officially gone under yet, but they will or they will be absorbed by another company completely by February 09 when transiting Neptune in Aquarius makes an exact square form their first house to Neptune in Scorpio in their 10th. They have been seriously deluding themselves. Also Pluto is going through the company’s 12th house and making an applying square to their Saturn in the second. They’ve been keeping secrets, and if they do get absorbed by another company, whoever takes them on will be hit with a necessary and very brutal restructuring in order to save what’s left which would take place in March of 2010. This lapse in time will probably be because the company has been hiding a lot and it will take time to sort out all the mess.

US Steel doesn’t look bad, there are some good aspects and some slightly negative things but nothing major. They may have some foreign issues, but nothing major. They will also do pretty well over this period. My grandmother used to work for US Steel when they had a manufacturing plant in Gary, Indiana. She made steel during the 30-60s. Pretty crazy, she had all sorts of scars along her arms from where she had been cut accidentally from the steel in the plant.

Intel has that critical O degrees Pluto in Libra dancing in its 11th house. It should be getting hammered in the stock market right now. But things will get better for them in late January when Pluto hits 2 Cap and trines the part of fortune in the 10th. This stock and/or company is going to go through some major changes over the next 15 years, if it can survive these changes it is going to do amazingly well and probably be one of those long term blue chip type of stocks. But its going to go through a lot.

Once Pluto stops squaring Proctor and Gamble’s Mercury in Libra at 0 degrees in the 12th house in January this company will do well. Much better then most. There are a lot of positive transits being made to both charts. I suppose they survived a Depression and a couple of recessions, so they know how to deal with down markets. They will actually do quite well throughout the next few years, which is all I looked at so…

I’m tired now. I’ll answer the rest of you all tomorrow!

Best wishes and many blessings,

On the prediction that India will hit Pak sites, I wonder whether this could happen thru US, becos it seems more likely that Obama will use his power to persuade Pak to let US take on the training camps etc in Pak. Don’t see India doing this unless we continue to get hit like 26/11. May be you could run a chart for US vis-a-vis Pak and see how it looks…

Any thoughts on the two unresolved Senate races in Minnesota and Georgia? I think you predicted the Senate would get close to 60 seats a few weeks back. I wonder what the cards say closer to the evantual realities. Thanks!

Another question. Some of Obama’s supporters are up in arms about the people he is choosing to work in his Administration. They feel that they have been betrayed. Will the Disgruntled Dems. get over it in time or will they hold a grudge for the next 4 years?

Will Arnold Schwartzenegger be joining Obama’s cabniet? I thought when Obama said a top Republican would be on his cabniet, it would be Arnie. Now he’s picked Gates to stay on as Sec. of Defense. Since some very conservative Christians are in top level positions in the military, this seems to be a wise move aimed at keeping them calm. What’s up for the Governator after his term runs out?

I sure hope he will be. After four years of having to look at Bush and Cheney, this lady would appreciate someone up there easier on the eyes. LOL