Bear in mind birth times are suspect so I used no house system just planetary aspects .

Just want to make all those pulling their hair out and freaking out about Trump. Just know his chart super sucks. He’s got far too many inconjunctions with Pluto to win the presidency. So no matter who you put up against him either Hillary or Bernie. Probably even o’malley although I haven’t even made a chart for him. The point here is to allow Trump to chill you to the bones so you go out and vote but don’t give yourself an ulcer over it. It’s going to be ok!

I decided to look at one other factor Uranus. I hadn’t utilized it because it generally doesn’t come into play but this election cycle is so strange and the desire by the people to find leadership that actually represents them is so strong I decided to take Uranus into account. And the person with the best aspects from natal to transit chart on Election Day is Bernie. Hands down. The fact that he isn’t using the structure of the plutocracy to win makes Uranus – the planet of the people the most important thing in his chart on that day. Uranus also rules surprises. So fingers crossed – if the people rise up and say no to the current corporate plutocracy – Bernie will win. And if he does it will be a huge victory for Democracy and the beginning of the unraveling of the plutocracy. If we choose to stay on our current course of the rich controlling our government than he doesn’t have a real chance. Let’s hope our fellow Americans are waking up to the fact that our system of government was hijacked by the rich and powerful decades ago.

Bare in mind the times of all these candidates are suspect so I am not using the rising sign or any kind of house placement – only the planetary energies and their interaction with one another.

I tried to upload them from my iPad yesterday and it didn’t work. Anyway here they are!

The Charts on Election Day

Wow, this took me awhile to figure out. I went through and methodically looked at all the main aspects to the planets I consider most important to the job of President. Chiefly Pluto because it rules over the powerful and who is more powerful on the world stage than the president of the United States? Next was Mars because the job description is commander and chief. Then came Jupiter, we all need luck and timing to get the job and there is a unique relationship between Jupiter and politicians. And finally Ceres true ruler of Virgo, ruler of service because after all the president is the ultimate public servant – the servant of the people. So with all that in mind I had to come up with a sort of rating system. Basically all aspects were good except inconjunctions because they rule separation. They are common in transiting charts of people who pass over. This aspect once unnoticed has proved to enlighten us to many mysteries in a chart. I included squares as positive because they represent tremendous energy even if it is difficult energy – it is fuel and indicates manifesting. My methods are unconventional but they work for me. Astrology is an art and an oracle so we astrologers all approach charts differently.

I’m not going to lie, I was kind of terrified to look at this becaus on a cursory glance Hillary didn’t have a lot of Pluto aspects which worried me. I couldn’t imagine anyone else in the job but I didn’t want to start suffering from wishful thinking and delusion. Although I didn’t have a blog during the 2000 election I did tell friends and family members that the test between Bush and Gore would end up being split. That Gore would win the popular vote but Bush the presidency. I had to do research and see if this had ever happened. I knew it was possible but not probable. I was really upset leading up to that election. I knew if Bush won dark days were ahead. But as fate would have it I suppose we needed darkness – with summer there is always a winter.

On my way! Caveat before I really get going. The second financial crisis I warned about in 2008 is now looming. I feel like it will be on the next president’s watch. The next post I do will be about that. An important thing to think about before voting is who do you want managing this? And we are not finished dealing with the quagmire of the Middle East – think about that.

This race has been a strange one. Both parties have their polar opposites Cruz and Sanders and then through a reality TV star into the mix and it seems that the woman is the most center and conventional choice which is why pundits have been betting on her. But the American people have a strong proclivity for celebrities. In California (I was living there at the time) we threw out our democratically elected governor for the terminator (Arnold). That was weird and I actually knew people who voted to do that because they thought it would be funny and or they just liked his movies. So one can not underestimate the idiocy of the electorate i.e. Donald Trump.

So here goes: Ted Cruz will end up being the nominee. His chart has tremendous energy behind it on Election Day. There are indicates that if he were to win he would not be able to keep the presidency. I think his viability would be challenged not so much because of him but because it would open a pandora’s box of possibilities such as a foreign born person born in a hostile country to us like countries in the middle-East. Once a ruling is made allowing Cruz to be President despite being born on foreign soil what about someone not only born in a different country but also raised there? Maybe someone whose allegiance to a foreign interest is the reason for their political career? I’m not saying this is likely but it is the reason the framers insisted on Americans born on US soil which was extended to US territories (with an American parent) in the 1930s. So this is not a settled issue and it would be a problem for him if he won. He would loose in court.

Donald Trump has a lot of energy transiting his chart – on first glance more than anyone. But it isn’t the right sort of energy to win the presidency. It’s mostly to personal planets and most of his Pluto stuff is negative. He has a lot of Pluto inconjunctions. In this case I think it means he will have been separated from a lot of his money and potentially power. With all that energy and investment on Trump’s part + his nariccistic personality I think there is a 85% chance he’ll break his “oath” and run as an independent.

Bernie – I LOVE Bernie. And I really wish Hillary would keep it in her pants and be a lady with him. She’s making her run more difficult because of this. He defended her. She needs to back off because he’s right and honestly with the looming financial crisis I would trust him above all others to do the right things and put the country onto a prosperous and equalized track – a path we haven’t seen in many generations. He would be my personal pick. Unfortunately his aspects are not good in the Pluto department. The only way he could win is if the electorate redifined the role of president and put the focus on service to the people rather than on the power on the world stage. In that case he would have a real shot. He also has a lot of energy behind him and if Hillary is smart she’ll make nice with him and get him on board as a VP.

Ok, Hillary – it’s a squeaker. By no means is it going to be easy or seem for sure. Election night will be tense and the best thing that could happen to her is if Trump split the republicans. If that were to happen she would win bigger but it still would be a battle. I wish it were more clear cut but it’s tight all the way around. I think the reason Hillary has less support or enthusiastic support is partially because the energy in her chart is more anemic than one would expect for such a big job. She’s lucky that the other candidates have so many inconjunction. This translates to more excitememt even some delusion as this -to me at least – is a sort of neptunian aspect. For that matter squares are Saturnian, sextiles are Venusian and trines are Jupitarian.

So sorry to those who wish it to be different. I am just an oracle – a messenger. I control nothing. I only report what the heavens show.
Blessings,

Below are the secondary charts I ran to see who was most presidential.  It also reveals the type of President they would be.

Hillary would be powerful, structured, authoritarian and verbally aggressive but the use of military force would come only after diplomacy and exhausting all other options.

Trump would be quick to use force and be aggressive in his dealings – quarrelsome and contentious.

Cruz would be duplicitous and untrustworthy. His motivations and actions self-serving. Think of the cronyism of Bush and the tactics of Nixon but with the sincerity of a used car salesman. South node bad!

I will post the transit charts separately as I meant to do this in this post but got the wrong set of charts loaded and took far too long to upload so…I am basing my assessment of the style of Prsidency mainly on the 10th house. 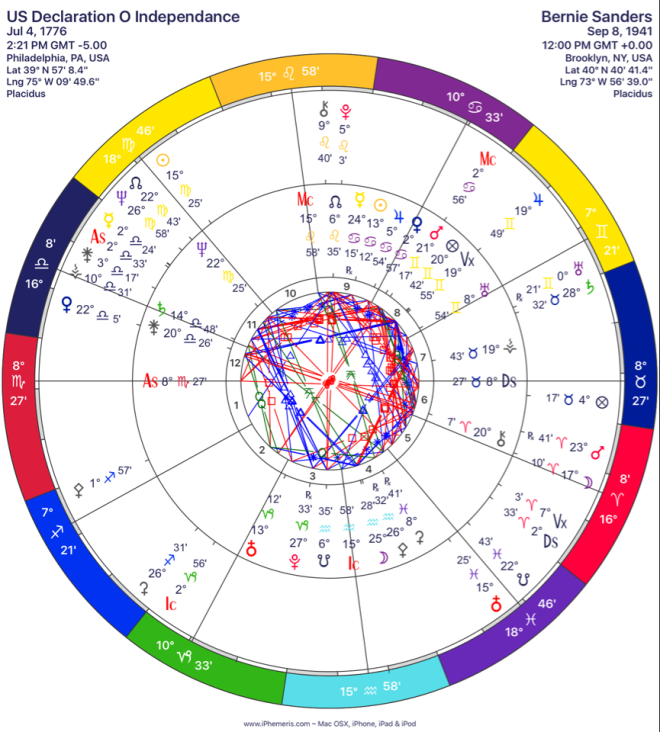 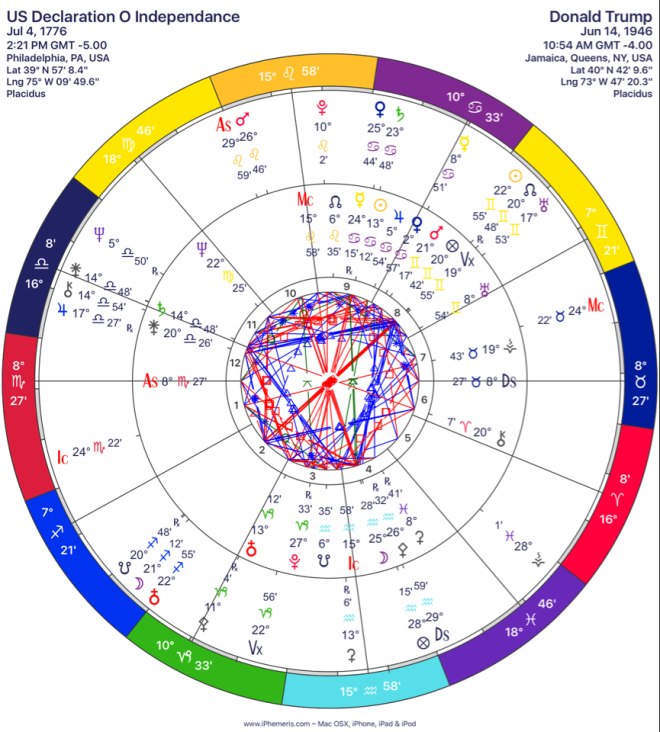 I have been going over Hillary’s char, Trump’s chart and now Cruise’s chart. I’ll post them in the next day or so that way everyone can read them. Cruise’s chart is more favorable than Trump’s for the general election but not by enough to predict a certain win. Tight. Hillary’s chart is not great. The timing is not the best for her – not bad but not a clear win. I wish it were.