I received an interesting e-mail from Carol in Australia, she asked:

What are your views on Karma?  Do you think there is such a thing as ‘The Universal Law of Karma’ or do you think it is a man-made-up concept?

The concept of karma is something I’ve thought about a lot. Perhaps too much, and from early childhood when I thought I’d invented the idea and told my mother about it, she informed me it was already a religious idea in play called karma.

In physics Newton’s 3rd law of motion is expression: To every action there is always an equal and opposite reaction (here’s a link to the 3 basic Newtonian laws: http://en.wikipedia.org/wiki/Newton%27s_laws_of_motion)

I believe that karma works in much the same way as this law of physics. It is not a judgment from God and/or directly related to anything divine. If something bad happens it could be bad karma being created which calls for a reaction or it maybe a reaction from some previous action. There is no way to know or judge. If someone does something good the same is true. It’s just energy calling for a reaction. I believe this rule or law of the universe exists to keep balance.

However westerners often have a distorted view of karma because they see the idea through the Judea/Christian lens.  Karma as most people view it is often distorted and inaccurate in my opinion because our notion of God is askew. To really understand (in my opinion) God/Goddess/Universe or the Divine is pretty much impossible. As a result we have anthropomorphized Him/Her to find a pathway into the incomprehensible. However the Divine is actually neither male nor female, nor is the Divine anything like what we have been trained to imagine it to be.

The further one gets into the depths of esoteric wisdom from all or any culture, the more one finds that the exoteric notion of God (sold to the commoners) when it gets deep into the esoteric understanding breaks down and becomes increasingly more vague, abstract, metaphoric and difficult to grasp. In the western esoteric tradition of Kabbalah (which was guarded for centuries and only relatively recently were women or married men able to learn it) the tree of life is broken down like this: 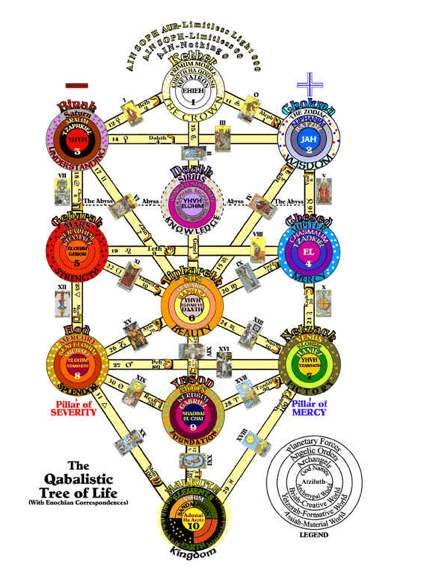 At the top is Kether. But what one can’t see (at least in this depiction) is the line between Kether and the rest of the tree.

Kether occupies a space beyond the veil of understanding, beyond anything we can know or understand in a sort of cosmic soup of oneness where there is no duality, no male and female, black and white, right or wrong.

It is actually the feminine side of the tree which triggered creation (and if one looks into the esoteric beliefs of Judea/Christians, it is the female side of God or the Goddess who brings the Universe into being.) Of course this idea pre-dates Judaism and perhaps is a carry over from all early religions when it was thought that the Great Goddess (name dependant on what part of the world looked at) gave birth to the Universe. The idea of a creator God is a modern notion that came about with the Jews. As the world went from nomadic and separate yet with equal places for men and women’s mysteries, to a patriarchal/agricultural way of life – where owning land (and women by extension as they were often associated with the Goddess/Mother Nature/or the Earth) led to dynasties and empires, the west transformed into a feudal society with a strict caste system of peasants and overlords which our American forefathers rallied against as they were merely land owners, most were not of royal blood.

History, spirituality, philosophy anything and everything, actually is filtered through the lens of the society that literally shapes our brains, our understanding of organization and our sense of self. It even shapes the form our government takes, the way we organize our home, how we feel about our bodies, sexuality, everything. Whether we are religious or not, the predominant paradigm shapes us whether we like it or not. Often people who claim to be atheists are really rejecting the Judea/Christian form of God. They in fact know nothing else and ironically in their rejection show a deep seated belief indoctrinated into them from childhood. I understand their feelings, yet, they are often shut down to anything spiritual due to their negative experience with Jehovah. Ironically, and as we know from history (hindsight is 20/20 as the saying goes) mistakes and philosophical cracks become obvious in retrospect.

I’m sorry I missed the opportunity to break the bad news to everyone about the Republican win. I haven’t wanted to address politics lately due to my feelings that Obama is in jeopardy of being seen in the light Jimmy Carter was. Here is an erudite, brilliant, compassionate, articulate, idealistic man who is talking to a group of schoolyard bullies (the Republicans) as if they have what most of us in the middle and on the left have – reason. Here’s the thing – it’s basic. It’s not just the glue of greed that binds Republicans together its the overuse of the reptilian part of their brain. They don’t live lives of reflection, but rather go forward into the world, unthinking, to dominate and take their place in the tribal pecking order (I could use a more derisive term like pack but I’ll stick with tribe).

Even before Obama became president I always worried that his cool, reasoned approach would be seen as weak among those who look to a leader to be a charismatic Ogre (or alcoholic father as the model went for Bush). When leading a group of people who don’t want to think, one has to do the thinking for them, one can not engage them in public discourse. They don’t want public discourse. They truly want to be bossed around, sent to bed without their dinner and derided for not doing what Big Daddy President said.

Until Obama realizes what he’s dealing with on the right – that he will never be able to engage them in an intellectual discussion of the issues or have an interesting debate and accept the fact that they need to be led like an alpha wolf leads a pack, then we are going to have serious trouble in the ranks. And really we will be in a major stale mate. Unfortunately for Obama those who are rational, sensitive, intelligent want to be engaged in the way he engages and like feeling we have a president and not a dictator.

My advise to him would be to appeal to his base with his usual calm reasoned intellect and keep the wolves in place with some good hard core training. I think he’s starting to get this. I just wish he would have gotten this a lot earlier. I think Hillary being in public life for so long knew this from the beginning which probably would have made her a much more effective leader early on – however when women are Alphas they are known as bitches. And it would seem that in our society sexism still trumps racism. We at least think about racism, I don’t believe we even question the ingrained sexist notions we have.

Sorry I couldn’t get to the question earlier…