I’m getting sick of waiting and its really starting to freak me out. My left brain keep saying to my intuition, come on, they’ll figure it out, they know how bad it will be if there’s no bail out. But with the Dow’s horrifying chart. My intuition keeps freaking out that there hasn’t been any agreement reached.

So I asked the tarot…

It will be close, but it will not pass. The spread is 5 no to 3 yes. Almost split. They will not be able to find bipartisan partnership here, and at the core of the problem are secret deals going on behind the scenes, people who are afraid their political power will ebb away if they vote for it. It would help the US economy and put us back into a competitive position in the world. But it doesn’t look like, at least for now that it will pass. I hope things change.

Hopefully, if all hell breaks loose eventually a new panacea to the problem will be found.

I have hope that it will, eventually.

I just worry that we’ll all suffer for a while until it gets so bad and it will take a herculean effort to get our economy back on track.

OK, what’s going to happen with the Bail Out? The Tarot Answers…

A reader wanted to know the best time to sell Lehman Brothers. Here’s the astrological answer: I’d go with Wednesday October 1, 2008. There are lots of good aspects that day. Here are the charts: 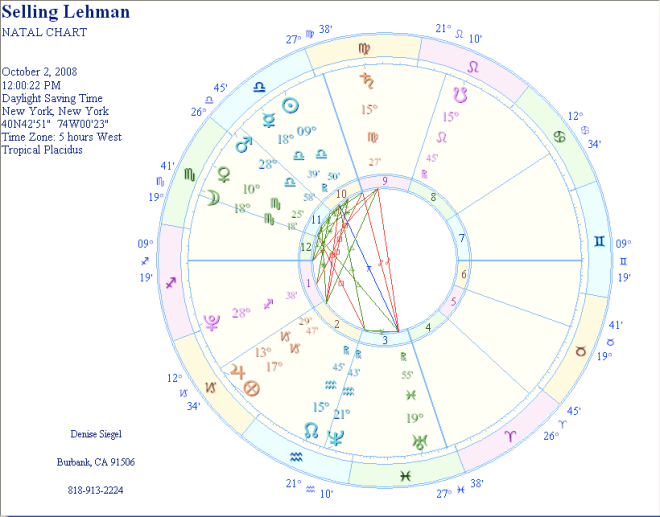 Both the 1st and 2nd of October are good, but I think the 2nd is a little better. There are lots of trines and positive aspects both days but on the 2nd they are tighter. I would sell this stock before Pluto opposes its natal Mercury in February of 09. But even then it won’t be a total disaster for Lehman, a restructuring in their work force which will make people nervous of course on Wall Street. This stock looks better than most, I must say. But with everything going crazy I personally would get out of the stock market right now and maybe reinvest in 09 when the stock is down, if everything gets worked out with the stock market itself which is another story.

A reader asks: is it possible that they both loose?

The answer to that is yes.

The will both win and lose which is why the answer is a draw. Depending on your perspective, but I get what your saying, neither will really come off all that great.

And I think your right. She will seem unqualified and he will appear to be a qualified bully. So again, yeah.

I hope for Biden’s sake he reigns it in and changes the potential outcome, because one can’t grow intelligence overnight, but one can be polite. For Biden this wouldn’t be an easy task as he has a tremendous amount of Scorpio in the 12th, and has just a generally nasty stinging impulse that gets out of his control easily.

Not only was he a great actor, but he was an amazing philanthropist and will be greatly missed. I feel for his wife of 40 years and wish his family the best through this terrible time. I’m posting his chart with the aspects that occurred today — the day he passed over.

If it’s any consulation to his family I don’t just believe people move on to another plane, I know it. Over the past few years (this was never my specialty, I was mostly a clairvoyant/precognitive type) I’ve made contact with my father and many other relatives just before the conception of my daughter. This is when they started showing up. The bothersome part is all the bizarre activity in our home as a result, which we’ve never had before. We’ve lived in the same  house for 12 years and nothing odd ever happened (except for the usual stuff that happens to people like me) but since then the faucet in our bathroom has gone on (with many witnesses) multiple times, and the other day in our kitchen faucet did the same. We’ve heard footsteps in the hallway, once when a friend was staying here, who also heard it. And all kinds of things jumping out of places they never did before, defying the rules of gravity. But, anyway, the other side is not what most religions teach, it’s more like an extension of earth, a weigh station where our loved ones wait until we come together and figure out what’s next. That’s what I’ve been told by numerous people over there. You may think I’m crazy, but what can I say. I’ve been seeing dead people now for a few years. Before that it was very rare, now it’s a daily event.

Anyway, back to Paul Newman. Here’s a chart of what happened to him on this day:

The outer rings are where the planets were today, the inner ring his natal chart. As we can see there was a lot of activity. Pluto has been going through his 12th house for a little while. Today it trined his eight house and Mars in the 3rd. He would experience his crossing as positive. It was his time to go and this was a good opportunity for his soul to transition to the other side. Jupiter also on his Mercury contributed to the expansion of his mind and he more than likely got to say good-bye to those he loved and had a gentle crossing with plenty of love and good feeling to stave off any fear.

Jupiter was also opposing his natal Pluto in the sixth, his house of health almost exactly, triggered by the exact conjunction with Jupiter to natal Mercury and activating this opposition. Saturn going through his 8th another indicator of physical death was also trining his rising, Mercury, Venus, Jupiter and transiting Jupiter, enabling him to let go of fear with the help of his loved ones — he was also able to resolve any unsaid things that he wanted to tell people.

It is a very sad thing and he will be missed in our world. Hopefully his friends and loved ones will be comforted to know his transition was positive and he was protected through his crossing. He’s in a good place now. He was a great man who gave so much and all his goodness will be rewarded.

My condolences to all who loved him, which is all of us.

Here’s his natal chart and a generic chart of today:

A reader asked about the results of the Palin/Biden debate October 2… So let’s ask the tarot.

It’s more than a draw then it should be. He will come out the clear winner in terms of understanding the economy, the work force and in terms of experience, but she will bait him emotionally and he will show a bit of the dark side of his personality. He will have to be careful not to seem condescending and snarky which will work to his disadvantage. She has more charisma than people are giving her credit for. She may not be bright, well suited for the job or experienced, but she’s likable and Biden will not have that advantage. It looks like Dem’s will see it as a win for their side and Republicans a win for her. Those who are undecided will be mixed about 50/50.

If he can reign in his dark side then he can win it, but only if he stays on very good behavior which is not his strong suit. And he must stick closely to the issues, not going off on weird tangents.

More clarification with the cards. What the viewing audience will see in terms of Palin:

The audience in general will like her. She appears confident even if foolish at times, and they will see her as wounded perhaps unfairly, even betrayed. She will be comfortable in that format (all those years in beauty competitions and being a sports caster will help). She will not have a strong grasp of her role or the job of Vice President and will be tongue tied at times, but will appear in control and on top of things in terms of her body language and strong self-confidence (or should I say over-confidence).

What the audience will see in terms of Biden:

He won’t appear to be very likable. He will come across as being secretive (which he is according to his chart, not that this makes him a bad guy, but people generally don’t trust people they feel are holding something back). He will have the tendency to be thrown off his game a bit, following odd tangents, and appear to be over thinking questions. He will not look victorious. On the good side, he will seem a good partner to Obama complimenting his gentleman style with a much more aggressive almost dictatorial personality. He will also come across as a family man, very much in love with his wife (and dead wife.)

Strangely, I would never have thought this reading possible. My intellect thought Biden would tear Palin a new one in the debate, but it looks like it’s not that clear cut as Biden has dark bossy tendencies and tangential thinking that will work against him. Again, he will also seem to be hiding something, what I don’t know. All in all he doesn’t have the charisma and energy of Palin who has nothing else to offer, but that. However, we’ve seen that alone win elections so, again it’s going to be a draw where I would have thought Biden to be a clear winner.

Result of the Palin/Biden Debate October 2… the tarot answers

If you have any questions you want the tarot to answer about politics, world events or economy or even stocks. Post in the comment section. I’ll answer it in a post.

If your intuition is telling you to sell a stock on a certain day, I can do a yes/no spread to let you know if it looks like a good time to sell with some interpretation added. If you don’t want anyone to know your financial info just write that in the post and I will not make it public.

I’m currently working on the astrology of the Georgia/Russia conflict and its relationship to the US. It’s complicated so look for that in the coming days.